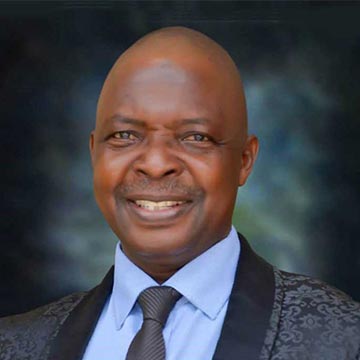 The Auditor-General For State

Mr. Folorunso Adebayo Adesina was born at Inisa in Odo-Otin (South) Local Government Council Area of Osun State on 4th of December, 1962.   After his preliminary education at Inisa, he proceeded to Lagos where he attended various Educational Institutions including Lagos State University where he bags a Degree of Bachelor of Science in Economics B.Sc. (Hons.) Economics in 1989.

He joined the then Oyo State Civil Service as Audit Officer Grade II in October 1990.  Between 1998 and 1999, he attended the Nigerian College of Accountancy Jos, Plateau State where he pursued a Post Graduate Diploma Course in Accountancy and passed out in September, 1999.  Upon his success in the Professional Examinations in Accountancy in 1999, he was admitted as a member of the Association of National Accountants of Nigeria on 20th day of December 2000, and became a FELLOW of the same Association on 11th October, 2012.

As Auditor-General for the State, Mr. Adesina has been auditing all Public Accounts of the State including Public Offices and Courts of the State in conformity with the stipulation of the provisions of Section 125 Sub-sections 1-6 of the 1999 Constitution of the Federal Republic of Nigeria as amended.  He has ensured optimal performance of the statutory role assigned to his office by constitution.   For instance, for the period, he had assumed duty, he has been promptly reporting on Accountant-General’s Annual Financial Statements and Accounts of the State as required by law under Section 125(5) of our constitution as quoted above to the admiration and commendation of the State House of Assembly.Apart from the above, the tenure of office of Mr. Folorunso Adesina as Auditor-General witness a tremendous development in terms of functionality of the office and its human Capital Resources Development from 2014 to date.  For instance, Courtesy of World Bank/European Union Support Programmes (SLOGOR), the Office of the State Auditor-General has been functionally reviewed i.e. the existing functions of the Office, e.g. audit method, audit procedure, audit process, were reviewed in line with the global best practices.

Trainings were organized for all staff to build their capacity in Audit planning, performance and report writing.  Consultants were employed to strengthen the capacity of Osun State Office of the Auditor-General on Risk based Audit, value for money Audit, Environmental Audit, Computer Assisted Audit Tools and Techniques (CAATT) and forensic Audit; 15 Audit Champions were selected among the staff for intensive trainings so that they will be able to train others and bring them to the same level with others.  These officers are now the vanguard of the office ready to face any audit challenges that may arise.
The Auditor-General and his staff also collaborated with the consultants to produce a draft AUDIT BILL.  The Audit Bill is a set of legal framework for the establishment of the Audit Service Commission in compliance with International Public Sector Auditing Standard (IPSAS) and the International Standards of Supreme Audit Institutions (SSAIS) as applicable to Public Sector Finances.

We thank God, the Auditor-General has seen the Bill through the approval of the State Executive Council and has finally been passed by the State House of Assembly.  We are awaiting the governor’s final assent and its implementation.

Financial Audit Manual was also prepared and made available to serve as a guide to Auditing processes. One unforgettable innovation introduced into the process of accountability by the current State Auditor-General is the holding of Annual Audit-Forum.  The Annual Audit Forum is a platform whereby the Auditor-General presents to the Public the Audited Accounts of the State Government for comments and observation of the people.   It would be recalled that Audit Forum on 2014, 2015, 2016, 2017 and 2018 Audited Accounts of the State Government were held in 2015, 2016, 2017 and 2019 respectively by the State Auditor-General Mr. Folorunso Adesina with positive comments from members of the public and the press (both Printed and Electronic Media) well acknowledged.

This action of the Auditor-General has been boosting the image of the State amongst the comity of States as being transparent, responsive and responsible Government which holds in high esteem the rendering of stewardship to the Electorate.

These achievements had remained a landmark in the history of Audit in this State and indeed, in the entire South-Western Nigeria.